Cork defects are for the garbage can. Have I already mentioned that? Annoyed by some bottles spoiled by cork faults (TCA), I wrote the other day that there are no longer any technical reasons for using a cork as a wine closure. As I’ve mentioned several times before, in addition to the risk of cork failure, i.e., contamination of the wine with TCA, natural corks also have the disadvantage that their oxygen transmission rate (OTR) can vary over several powers of ten.

In fact, the nano- or micro-oxidation associated with low OTR, which benefits the few wines that require long cellar aging, has long been a good argument for the cork. Screw caps with a metal seal allow significantly less oxygen to pass through, which is why wines ripen differently under natural corks than under such particularly diffusion-tight screw caps. In the meantime, however, there are special screw caps from many suppliers with precisely adjusted OTRs that allow exactly the right nano oxidation for each type of wine. (See e.g. here: http://winesvinesanalytics.com/…/Product-Focus… )

Cork defects could be prevented

Compared to corks, these closures have the advantage that the fluctuation range of oxygen permeability is very small, so different bottles ripen very similarly. Every ambitious wine drinker who stores storable wines such as Bordeaux GCC or Barolo himself until they are ready to drink knows that after 10 or 20 years, two bottles from the same case may have developed completely differently. The reason is then almost always the different OTRs of the corks. 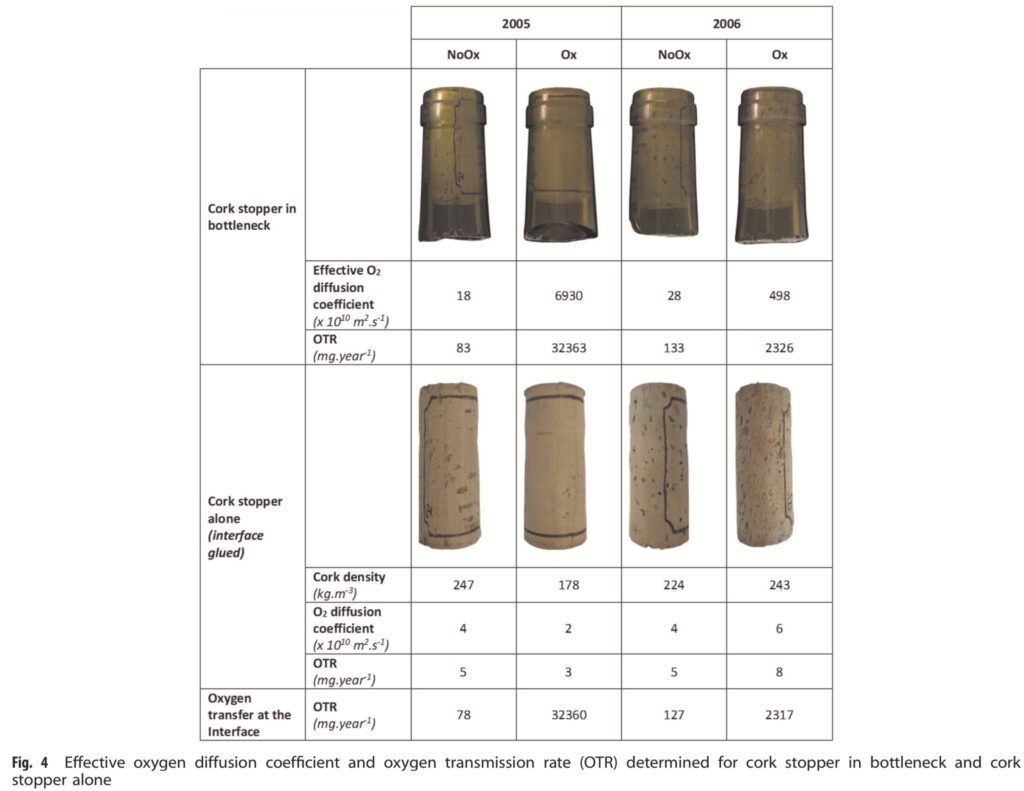 The problem of premature oxidation (Premox), which since the 1990s has affected mainly (but not only) white Burgundies, where it is as big a plague as TCA, is thought to have many different causes. While researching cork closures, I came across an interesting paper in npj Science of Food that proves the different OTRs of natural corks are a major factor in Premox. Here is my brief summary:

Two bottles of each of the same wines were selected by color, one showing signs of Premox and the other showing intact color. Now the bottles were tapped through the glass to remove and examine the wine. Then the gas permeability of the corks in the neck of the bottle was measured. The result: the corks of the wines that had been spoiled by Premox allowed up to 390 times more oxygen to pass through than the corks of the intact bottles. While through the good cork only 0.08 g of oxygen per year could pass, the bad cork let pass the whole 32.4 g of oxygen per year. It is interesting to note that the lion’s share of the oxygen diffused into the bottle at the interface between the cork and the glass. I like to compare this variation with the variation of a car’s engine power. A car that has 150 hp according to the data sheet may actually have only 140 hp or a full 160 hp. If it had the quality of a cork, however, it could also happen to have only 3 hp or even a fearsome 1200 hp. Would the customer accept such a range of variations? If it makes a nice “pop” when opened, perhaps so, but then people are happy to settle for 3 hp…