Why do you decant a wine?

Why do you decant a wine?

Should you give the wine air and what actually happens?

Today we will get to the bottom of this frequently asked question. Because many still inexperienced wine lovers often ask themselves: “Do I have to decant the wine?” Or, “How long should I leave the wine in the carafe?” And here we are already at two quite different operations of wine preparation. Decanting and carafing are often lumped together and used interchangeably. Yet they are two very different methods with different purposes. 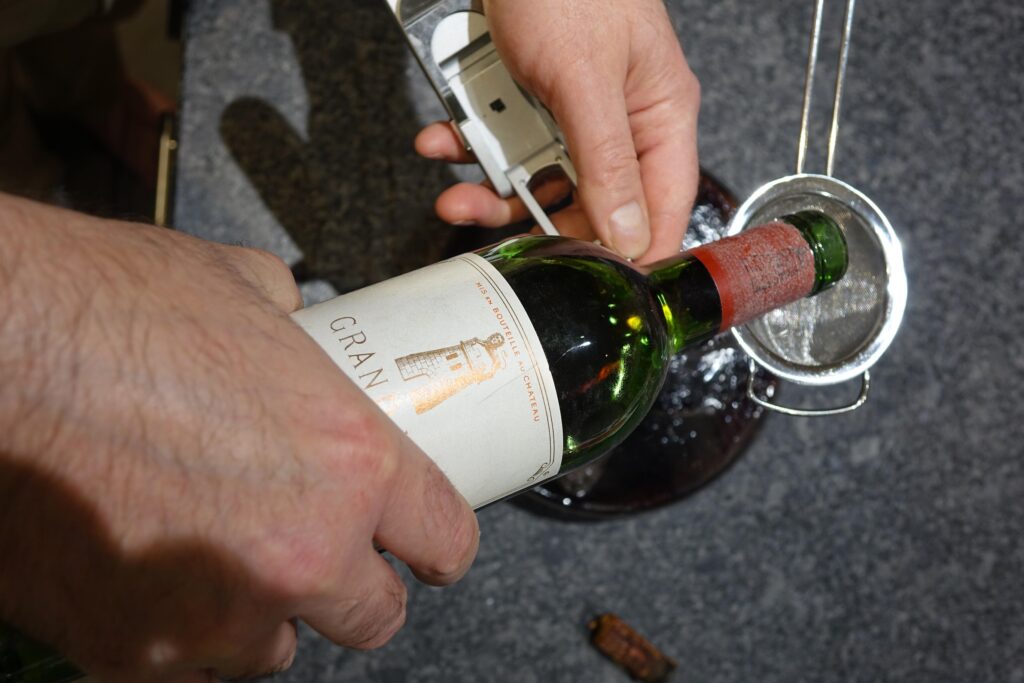 Immediately before the sediment is poured out with the wine, one wants to stop the pouring during decanting. To recognize this moment, a point source of light behind the neck of the bottle helps to shine through the outflowing wine. A small LED reading lamp is better for this than a classic candle. A fine decanting sieve cannot stop the even finer deposit, it serves to catch any cork crumbs. (c) weinkellerschweiz.ch

Decanting is a terminus technique from chemistry for the process of separating two immiscible phases of different densities by careful pouring. Usually, decantation is used to separate a liquid from a solid that has sunk to the bottom of the vessel. And this is exactly why you decant a wine: you want to separate the clear wine from its deposit, that is, from precipitated solids such as tartar or tannins and tannins polymerized by aging processes. Most tannic red wines form a deposit over time because their polyphenols, usually induced by small amounts of oxygen diffusing through the cork when the wine is stored, combine to form longer chains. Chained together in this way, they lose a large part of their freedom of movement – the expert calls it entropy – and thus the desire to remain dissolved in the wine. They precipitate as fine, red-black solids. This makes it clear that wines have more deposits the older they are. This answers a frequently asked question: should you decant an old, even a very old wine? Yes! Especially an old wine should be separated from its deposit! Young wines cannot be decanted at all if they have not yet formed a deposit.

Why can’t you decant a wine directly into the glass? Decanting, of course, only works as long as the sediment is at the bottom of the bottle and not dispersed in the wine. So you have to avoid the sediment being stirred up in the wine. But this inevitably happens when you put a half-filled bottle back down after pouring – this always creates eddies that entrain a loose deposit. Only if the deposit adheres firmly to the glass over the years and is caked together does this not happen. So, when decanting, you have to empty the bottle slowly in one go. Therefore, always decant the wine into a decanter or carafe; empty, clean water or wine bottle is also an option, using a funnel. A light source, positioned in line with the eye and the neck of the bottle behind the latter, helps to detect when the wine, clouded by the deposit, is about to come. For this you do not have to take a candle, I always use a mobile reading lamp with a dotted LED. If you absolutely do not want to decant in one go, you should use a decanting basket in which the bottle can be placed almost horizontally, at an angle of around 30° – this minimizes the swirling of the deposit when the bottle is placed down.

There are many different wine decanter (c) Simon Vineo Tauscher

Now, one often hears that very old wines can be sent to the afterlife by decanting. Personally, I was allowed to taste several hundred 70- to 150-year-old wines, and all of them were decanted. No wine died as a result. Several old wine connoisseurs who have acquired their knowledge not only by reading but by practical experience with hundreds and more old wines confirm this. But there are also wine connoisseurs who report that very old wines have suffered from decanting. I myself have experienced how 100-year-old wines started out great and then collapsed in the glass within 15, 20 minutes. But I don’t think that the process of decanting, which lasts no longer than a minute, has much influence. More about this in the next chapter on caraffing.

The purpose of decanting is to aerate a wine, to let it breathe. For this purpose, the wine is decanted into a carafe in which the contact surface with the air is larger than in the bottle. Particularly suitable are wide-bellied decanters, filled just to the widest part, if they contain a whole bottle of wine. When decanting, it is important not to let the wine get too warm. Red wine is best served around 16°C in the glass – or cooler, depending on the wine, or up to 18°C. But not warmer, because it becomes that in the glass very quickly anyway. If I want to carafe a wine for some time, I should put it in a cool place, preferably in the wine cellar. For a bottle of white wine, you can put the carafe in an ice bath 15 minutes before drinking.

What happens in the air? In the first hour, physical effects dominate: volatile components evaporate and evaporate. These can be mercaptans such as ethanethiol and other alkylthiols, which in higher concentrations cause the buzz, and in lower concentrations cause vegetal tones reminiscent of cabbage. Also, the concentration of aldehydes, hydrogen sulfide, sulfur dioxide, and even alcohol decreases: during 2 hours in the air wine loses about one percentage point of alcohol. In turn, the wine absorbs oxygen – in a sealed bottle there is no free oxygen because the wine has consumed all available oxygen through chemical reactions. In the air, oxygen now dissolves in the wine – a purely physical process, just as salt dissolves in water. A maximum of just under 10 mg/l oxygen can dissolve in wine. 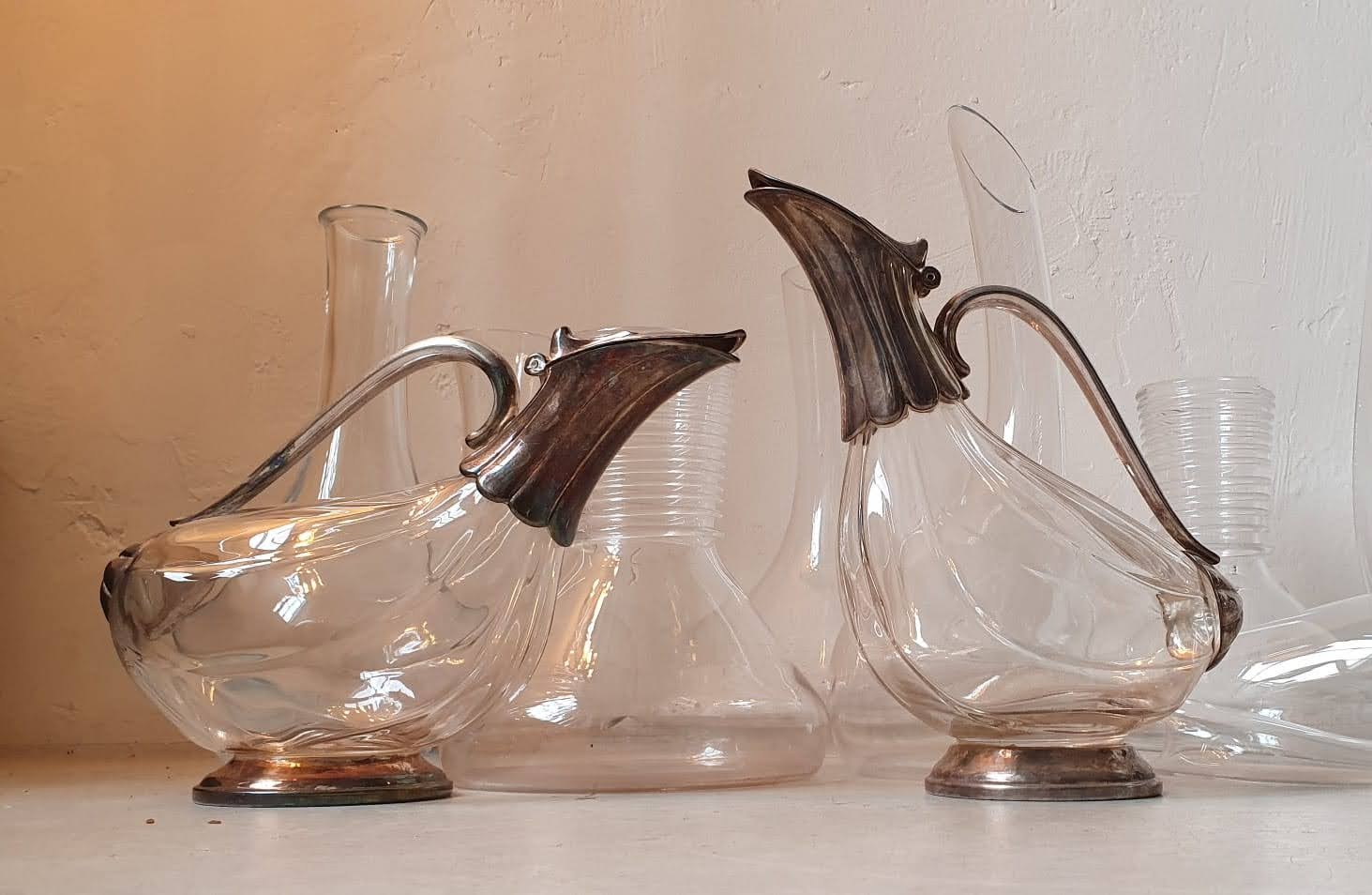 Among them, there are also proud specimens, like these two classic “ducks” (c) Simon Vineo Tauscher

Slower than evaporation is chemical reactions triggered by oxygen. If a wine is left in the decanter for more than an hour, these reactions become noticeable. For example, the oxygen reacts with polyphenols in the wine, triggering entire cascades of reactions that are well studied and known. With traces of iron and copper, highly reactive radicals are formed that rapidly react with other ingredients in the wine. All of these reactions take place for years in the sealed bottle because minute amounts of oxygen continuously diffuse through the cork. If the wine in the carafe is saturated with oxygen, these reactions take place faster by orders of magnitude. If one wants to accelerate the saturation with oxygen and also the evaporation of interfering substances, one can decant the wine twice or several times or let it rotate violently in a wide-bellied carafe by swirling. Nevertheless, the chemical reactions do not happen in minutes, but over several hours. Therefore, you can decant an old wine without any problems and without the oxygen harming it. However, a fragile old wine should not be left in a decanter for long but should be decanted immediately before drinking. Slim decanters, in which the wine has only a small contact surface with the air, are better suited for this purpose than broad-bellied decanters, which are designed to aerate wine. Old wine is either already oxidized and broken by the time you operate the cork out, or it will survive decanting as well.

However, not all old wines are so fragile that they soon degrade when exposed to air. There are many old wines, such as Vandermeulen’s 1955 Clos de Tart, that benefit enormously from several hours of decanting. But which wine should I decant now, and which should I carafe, that is, let it breathe in the air in the carafe? For decanting, the question is easy to answer: a wine that has formed a deposit should be decanted. For decanting, there is no blanket answer. As a rule of thumb, the younger the wine, the more astringent its tannins, and the longer the wine should be aerated. Only very young wines, which one would like to taste still in their primary fruit phase, should be tasted from the bottle and only then caraffed if necessary. In general, it is advisable to take a test sip after opening the bottle and then decide whether to decant the wine into a carafe. If it seems harsh or constricted, air will do it well. Old wines beyond 70 sometimes exhibit a dull musty tone reminiscent of old, wet cardboard. This is also a clear case for the decanter: such musty tones often dissipate in the air. Only against a cork defect, i.e. TCA, aeration does not help. This off-flavor gets worse with time. By the way, not only do red and white wines benefit from decanting but also good champagnes, especially vintage champagnes may be decanted into a wine decanter. It’s tremendous how some champagnes blossom as a result. And don’t worry: the mousseux is not lost.