Krug – Many German winemakers used to seek their fortune abroad and in Champagne. Among them, in addition to Bollinger, Deutz, Mumm and still some others, probably the most famous today and born in Mainz founder of the house Krug, Joseph Krug.

The Maison Krug occupies in every respect an exceptional position in Champagne. Primus inter pares is not an exaggeration, but apt. There are only superlatives for Krug. The relevant specialist literature always rates Krug with 10 out of 10 and absolutely rightly so.

But with what does Krug always achieve the maximum in champagne production? It starts with the fact that although Krug belongs to the corporate multinational LVMH, it still operates completely independently. One might now think that this makes the champagne house less quality-conscious than the parent company. Au contraire! We are dealing here with quality fanatics par excellence. More is simply not possible. 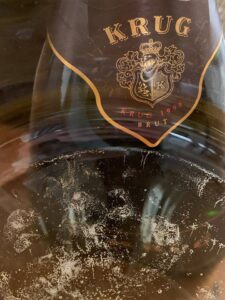 Krug champagne and the reserve wine

It goes on to say that no house can draw on as many reserve wines as Krug (at least none that I know of). The “Multivintage” champagne Grande Cuvée consists of more than 100 (up to 200) reserve wines and one main wine from the respective year. This composition alone is a remarkable and incredible feat, for which Krug is accorded great respect, not least in Champagne among its winemakers.

Krug was also the first house to produce a Champagne not only from one year, but also from a single Clos, or walled vineyard, from which the grapes come. In 1979, Krug started with the Clos du Mesnil. This walled vineyard is located in the middle of a residential area in Le Mesnil-sur-Oger in the Côte des Blancs and is planted purely to Chardonnay. The wine is priced far from what one commonly thinks of when thinking of Champagne, but even so: At Krug, the word “common” is non-existent in any sense. Then in 1995, the Champagne house launched its counterpart, a pure Pinot Noir Champagne under the name Clos d’Ambonnay.

Krug makes the Vintage (only in top years) with the three classic grape varieties of Champagne. Current release is 2006! 2008 is still dormant, but hey, it’s only 2020!

Then there’s a step up to that, the Krug Collection. This one has a gold label on the neck of the bottle. The (vintage) wine sits longer than the others before being disgorged.

The 1990 Krug Collection, for example, lay in the cellar for 24 years (!) and was disgorged in 2015. It is a pleasure to drink today. It is not old or stale, no way! The yeast that was in the bottle before degorgement made it stable and gave it the exciting aromas. Champagne basically gains through aging. A vintage Champagne must age on its lees for at least three years before dégorgement, according to French law. Vintage lots, or gros, require a minimum of 15 months.

The best wine is the wine sold. Therefore, winemakers must also sell. However, time plays (no) special role at Krug, here you have patience and much more, just no time pressure. Therefore, you can relax and let a Krug Collection mature in the cellar for a quarter of a century!

Then, and this is not so well known, there is an edition where Krug leaves the Champagne in its own cellar for another 10 years after degorgement = perfect storage at about 13 degrees. For example, Krug disgorged the Vintage 1988 (outstanding year) in 2005 and then again stored part of the bouteilles in their own cellar for ten years until 2015. Only then did it go on sale. Imagine drinking today, in the summer of 2020, a champagne from 1988 that is not dead, but alive! And this brings us to the only “disadvantage”. The wines are partially immortal or need longer to mature than the longest thread of patience lasts. This breaks before the jug has reached the pleasure well. Catching the optimal drinking window with Krug is an art that can be based on experience. The 88 I had recently is – simply too young. Sounds strange, but it is. This wine has an acidity that disturbs the overall picture (still). On the second day, the champagne became a bit more pleasing and revealed a bit more of its aromatic diversity.

Probably Krug’s best-known Champagne is the Grande Cuvée, into which up to 200 base wines from different years are blended. Chef de Cave was previously Eric Lebel, today it is Julie Cavil who is responsible for these compositions. The picture shows the 164ème edition. 127 base wines from eleven different years. The main and youngest wine is 2008 (great year), the oldest wine is from 1990. This has to be composed in such a way that it not only tastes great afterwards, but is terrific – otherwise it wouldn’t be Krug. What an achievement. No one else in Champagne can do that, which is purely because no one has such a winelibrary. This “Krug perfume” that the wine exudes is unique. One notices that grand masters were at work here in the composition. Fascinating!

I am already aware that I, as a nerd, speak for many a language that sounds Spanish and describes a world that does not open up to everyone. That is completely ok. But please get involved and have a pitcher. This should be on the bucket list of those who like pearls in a glass. And my FB friends are, after all, invariably curious and intelligent – so go for it!

I would love to hear about your report in the comments! Santé!

About the Author: Marc von Harten